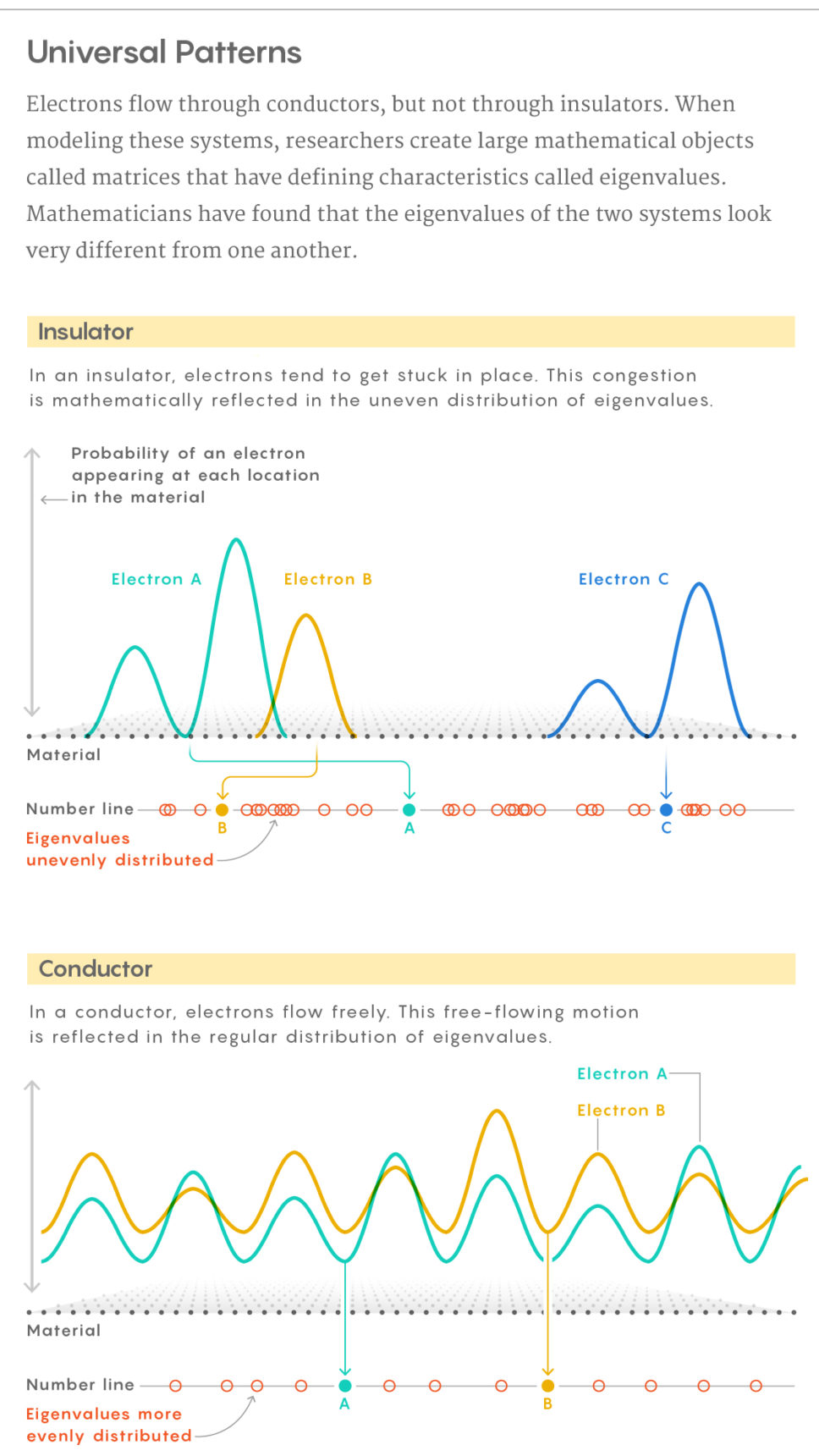 "In a wire, electrons rebound off each other in such a complicated fashion that there’s no way to follow exactly what’s happening.

That, at least, has been the hunch. Over the last half-century mathematicians have been searching for mathematical models that bear it out. They’ve been trying to prove that this beautiful statistical picture really does hold absolutely.

And in a paper posted online last summer, a trio of mathematicians have come the closest yet to doing so. In that work, Paul Bourgade of New York University, Horng-Tzer Yau of Harvard University, and Jun Yin of the University of California, Los Angeles, prove the existence of a mathematical signature called “universality” that certifies that a material conducts electricity.

“What they show, which I think is a breakthrough mathematically … is that first you have conduction, and second [you have] universality,” said Tom Spencer, a mathematician at the Institute for Advanced Study in Princeton, New Jersey.

The paper is the latest validation of a grand vision for quantum physics set forward in the 1960s by the famed physicist Eugene Wigner. Wigner understood that quantum interactions are too complicated to be described exactly, but he hoped the essence of those interactions would emerge in broad statistical strokes.

This new work establishes that, to an extent that might have surprised even Wigner, his hope was well-founded.

Universally Strange
Even seemingly isolated and unrelated events can fall into a predictable statistical pattern. Take the act of murder, for example. The stew of circumstances and emotions that combine to lead one person to kill another is unique to each crime. And yet someone observing crime statistics in the heat of an urban summer can predict with a high degree of accuracy when the next body will fall.

There are many different types of statistical patterns that independent events can follow. The most famous statistical pattern of all is the normal distribution, which takes the shape of a bell curve and describes the statistical distribution of a wide range of uncorrelated events (like heights in a population or scores on the SAT). There’s also Zipf’s law, which describes the relative sizes of the largest numbers in a data set, and Benford’s law, which characterizes the distribution of first digits in the numbers in a data set.

Extract from an article written by Kevin Hartnett, Quanta Magazine May 6 2019